Citizens for the Preservation of Wildlife, Inc. (CPW), was founded in September 1997. It began with a small group of concerned individuals (a group of only 6 people), who were devastated by the massive killing of Canada geese in Virginia. For a few years, this small group worked hard to stop the killing of Canada geese. After a few years of severe emotional hardship, lots of money put into the campaign, and USDA continuing to kill Canada geese, this small group of people gave up the fight of trying to stop the government from killing geese. CPW was successful in winning two Federal lawsuits though, which prevented some geese from being killed, but USDA found ways to not answer to the public about killing geese.

Our of the founders, Robin McClary, who was already a State Licensed small mammal wildlife rehabilitator with the Commonwealth of Virginia, felt the organization was not demonstrating its strengths by participating in the political arena. As Director of the organization, she directed and molded the organization towards becoming a wildlife rescue and rehabilitation organization. That was in 1999, and since then, our volunteers have rescued and rehabilitated thousands of small mammals and waterfowl each year. In 2000, Robin obtained her Special Purpose License from Dept. of Interior, so that she could rehab Canada geese and mallards. We specialize in rescuing and rehabbing waterfowl because there is such a need, and there are few licensed waterfowl rehabbers, and even fewer volunteers who will do direct rescues of injured waterfowl.

The organization has grown from rehabbing wildlife in a small basement in a townhouse, to sheltering waterfowl in a huge Aviary, which is 24’ by 24’, and 6’ tall, with two small ponds. The organization also has a building (The Center), which was just constructed this year, to rehab wildlife not able to live in the Aviary for medical reasons, or wildlife such as ducklings or goslings, who aren’t able to live outside yet. The cute little baby squirrels are rehabbed in the Center also. The Center is called “Ohminee,” which is a Native American term for “compassion.”

The Board of Directors, members, and volunteers, put in as much free time as possible to run the organization, conduct rescues, transport/pick up injured animals from Vets or other rehabbers, and answer calls from people who have found injured wildlife. Rehabbers and volunteers helping and caring for injured wildlife are not paid. CPW also works with several County schools to provide training to young people, who are trying to obtain hours for community service work, or credit for college (while they are in High School).


Our Chairperson and State and Federally licensed rehabber, Robin McClary, provides on- site training to volunteers. Volunteers are trained in recognizing types of injuries, how to safely catch the injured animal, the nature of Canada geese (family structure, behaviors in sexes, what the geese are communicating), and informing the public on correct information pertaining to geese. Volunteers are expected to abide by the Wildlife Rehabilitators Code of Ethics (written up by Dept. of Game & Inland Fisheries) at all times. The rehabber is involved in every rescue and release, and makes it mandatory that the released waterfowl (after rehabilitation) be returned back to the site where it was found injured, so that it rejoins its family and mate.

CPW responds to calls about injured, orphaned, or at risk waterfowl 365 days a year. We also rehab small mammals. Hundreds of animals are rehabbed and released each year. Devoted volunteers rescue over 2,000 injured waterfowl a year. 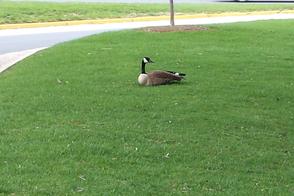